Today Steve Ballmer stepped up on stage and stated that while we’ve seen great change with things like cloud computing, Windows is the “heart and soul” of Microsoft. There are over 1 billion PCs including embedded machines and workstations. Windows 8 was designed “for the world we know, in which most computers are mobile.” He added that today they would add another piece to the Windows 8 story. People want to use Windows without compromise, right? When Ballmer joined Microsoft in 1980, their number one product by revenue was a hardware product.

Then he dropped this: “We believe that any intersection between human and machine can be made better when every aspect of the experience, hardware and software, are considered together.” The example he shared was Xbox with Kinect.

More PCs will be delivered in 2013 than any previous year. According to the IDC, that will be 375 million units.

And then … bang! “Something new, something different.”

Yes, there will be a new family of computing devices from Microsoft. 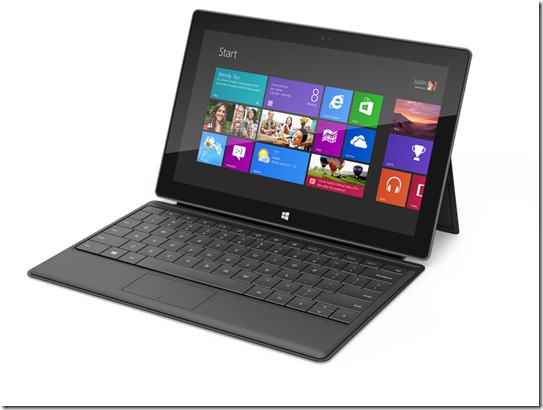 The tablet is 9mm thick when you get the ARM version, and 13mm thick when you go for the more powerful “Pro” version. It is less than 1 1/2 pounds and sports a 10.6” ClearType HD display with Gorilla Glass 2 (that means it’s scratch-resistant). Up to 128 GB solid state drives. USB 2.0 (3.0 in the Pro version). There is a built-in stand that is less than the thickness of a credit card and a magnetic cover that turns into a keyboard.

How cool is that?

It’s a pretty exciting announcement. To me, it’s not about what Microsoft is releasing, however. Unlike Apple, Microsoft releases Windows 8 to OEMs who can build their own hardware. This means more innovation from other companies and the opportunity to see tablets that are even more innovative than ever before.

Go check it out at the new official website: http://www.surface.com/ and I’ll continue to post coverage as more hands-on videos, blog posts, and links surface on my Windows 8 page you can visit by clicking here.